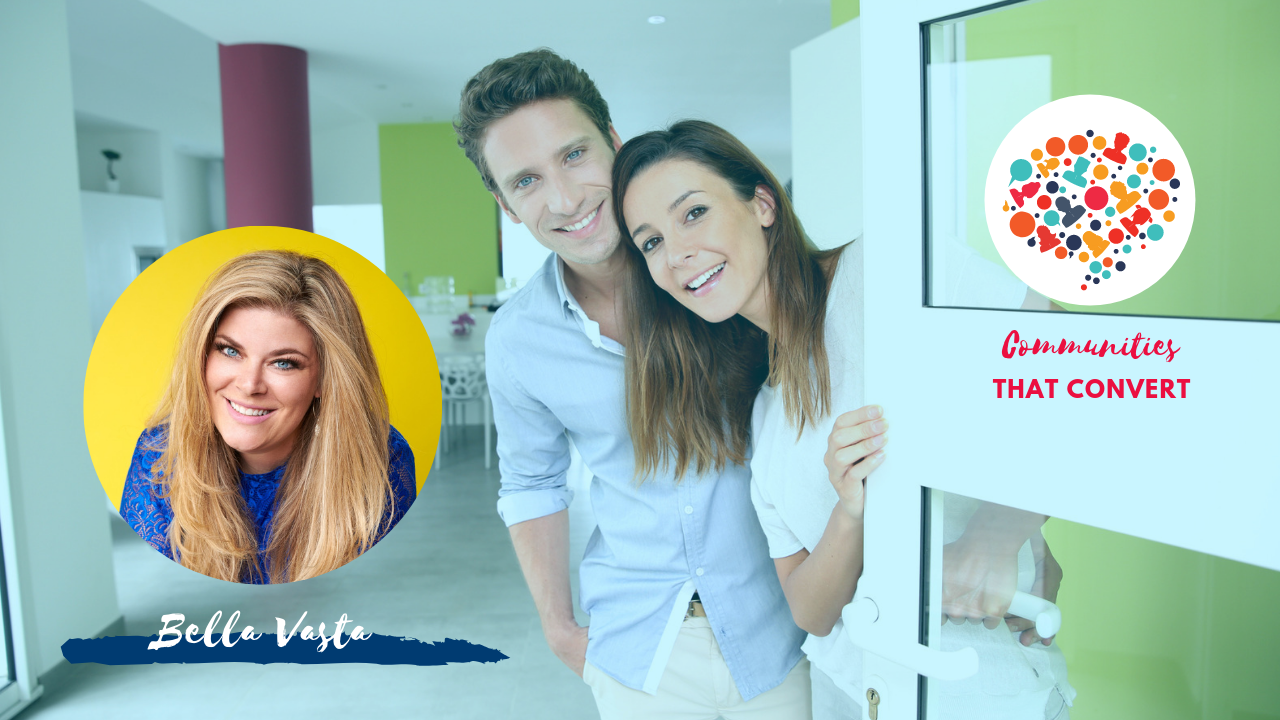 Bella Vasta is a veteran community builder who built a successful business while supporting her online community and she shares how you can build your own.

We have a treat for you today. Bella Vasta shares her secrets for building a strong online community.

Bella Vasta is the dynamic personality behind the one-woman coaching company, Jump Consulting. As a child, she was always the kid in the neighborhood organizing everyone and coming up with ways to make money. After starting her pet sitting company while attending college, she went full speed ahead when she graduated, growing Bella’s House & Pet Sitting to become nationally and locally award-winning. Throughout the years, Bella has been known to blaze her own trail through the pet sitting industry, carving out a path that many would follow. After the birth of her micro-premie daughter in July 2014, born at only 12 oz., Bella sold her pet sitting business for over six figures, and now lives out her passion to be a Mom and Wife first, and then to inspire, motivate, and challenge business owners through her coaching.

How to Connect with Bella Vasta.

Question: Tell us about your online community and how it got started.

Answer: Back in 2012 before groups were cool, there were some pet sitting groups. I didn’t really like the tone, it was kind of “cat-y”, full of drama, people that had no idea what they were doing were giving advice and people were taking it. I started my own group called “I own a pet sitting company with staff.” That sounds like a niche of a niche. It was not only for pet sitters but also for those who have staff. My company focused on those people that had staff and wanted to grow it from there. I was a dictator and I wasn’t concerned about numbers and growing, but making it a tight-knit community.

Fast forward about three years, I started another company called “Jump Start Your Pet Business” and that was for anyone in the pet industry that had a pet business like a groomer, a trainer, pet sitter, dog walker or pet store owner. The Jump Start group is at the top of the funnel of Facebook Groups, the catch-all group that I advertised everywhere from my website  to email to Facebook cover, Twitter, Instagram, email nurture campaigns, everywhere. Once people were in that group, I determined who had staff and directed them to the smaller group.

At the beginning of 2018, I started a mastermind group, but it’s more of a subscription group.  If you’re still imagining the funnel, the mastermind group is at the bottom of the funnel. Then I also have a lot of pop-up groups. When I want to generate revenue or I have a class coming out or want to revive a class I’ve had before, I go to the JumpStartroup and ask who wants to do a 5-6 week course on how to build employees or Instagram or whatever is needed. I’ll assign a ticket to it that starts and stops at a certain time.

I got the idea of Jump Start groups after working out a lot on Beachbody and having a core group of women who would complete challenges together. I thought it could work in business too.

Answer: I have Facebook Group for Facebook Groups which is a free group where we talk about things going on in Facebook groups, for people that want to be better admins. Then I have the three pet sitting groups. That’s it on a regular basis. Sometimes I might have a pop-up group, but I’m also a member of them. One of the things people don’t realize is that you don’t have to run a group. You can be a valuable member of someone else’s group and really align yourself with the group admin and it’s a great way to get notoriety and be positioned as an expert. You don’t have to be an admin and start your own group.

Question: How do you add value to your month to month paid Facebook groups?

Answer: There are three major ways:

Question: What kind of turnover rate should you expect? How do you handle the retention rate?

Answer: It sucks! It is definitely difficult. Everyone starting out the gate gets a false sense of reality because everyone is excited and then it levels off and the real work starts. Just like a business, you have to be marketing and bringing in new clients and surprising and delighting the ones you have. You have to keep it fresh and tease the future. Call upon your members to ask for their opinions, why they stay in the group, why they joined and what they love the most. And when people leave, ask them why, usually time and money. There’s no secret to it, you just have to show up, plan content and be different and give the people what they want.

Question: What is the optimal size for a paid group?

Answer: There’s really no optimal size. If you have a group that’s $5 a month to join, you’re going to want thousands of people in there. If you have a tiny mastermind that’s $2500 a month to join and it’s high level, fast-paced with lots of information, you probably want a dozen or less. It also goes back to the group admin strategy and more so how that ties into the zeros in their bank account.

Question: What is the best pricing strategy for a paid Facebook group?

Answer: It depends. How much time do you have to dedicate to the group? You can hide out more when it’s a massive group rather than a smaller intimate group.

Do you have the time and energy to host an intimate party with only ten people around the picnic table? Or do you want a rager where there are a thousand people everywhere and people don’t know where you are and you can dip in and out?

How to reach Kami:

How to reach Madalyn:

We have a new community on Facebook. We will extend the conversation from each episode and deliver bonus content. Sign up for our email list at http://bit.ly/CTCVIP to get an invitation to join or just click the “Join Our Free Community” below to head straight to Facebook (shhh. The codeword is ACTION)!

Other Places to Listen