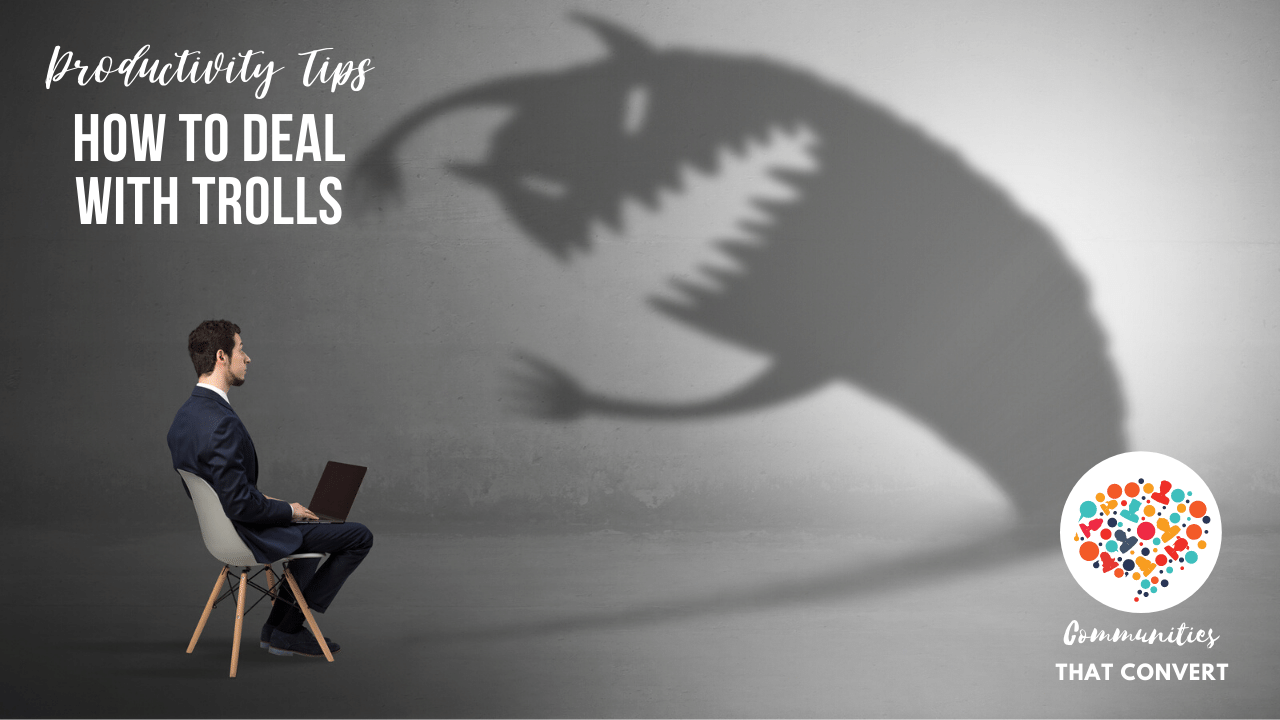 What can you do if you have troublemakers and trolls in your online community? We invited expert Andrea Weckerle to give us tips to handle trolls.

Andrea is the Founder of CiviliNation and the author of the book Civility in the Digital Age: How Companies and People Can Triumph over Haters, Trolls, Bullies and Other Jerks. She earned her Juris Doctor at T.C. Williams School of Law, University of Richmond, where she also served on the Senior Staff of the Richmond Journal of Law & Technology, the first exclusively online, student-edited law journal in the U.S. In addition to her law degree, she underwent extensive mediation training, earning certificates in Commercial Mediation and Conflict Resolution Processes. She also holds a Master of Arts degree in Public Relations/Conflict Analysis and Resolution from George Mason University.

Question: What is a troll?

Answer: Trolls are not people who are simply disagreeable. They’re individuals who intentionally provoke, disrupt or hurt others for fun and sport. They initiate online conflict. They aren’t interested in legitimate debate or in moving a conversation forward, even if they pretend to be. Getting a reaction is what they live for and the more intense, the better.

Question: Are all trolls the same or are there different types?

Answer: There are a variety of trolls. One of the most common are the ones called “psycho trolls” which are the ones who are particularly vial. They enjoy mocking, harassing, intimidating and tearing others down. What’s interesting about them is that they feel good when others feel bad. Another type, the “flamer trolls” don’t make any valuable contributions to a post or group, but instead make inflammatory comments to get others riled up. Another type of troll is the “hit and run” type who make a post or two about something outrageous and then disappear after achieving the goal of upsetting others or creating chaos. Another type, among others, is the “vendetta troll” who go online and leave untruthful comments about someone they don’t like and chase them around the Internet.

Question: Are trolls just people who disagree with or criticize something online? Aren’t they covered by freedom of speech?

Answer: Here in the United States, this is something we talk about a lot because we have very strong freedom of speech laws. Generally, trolls are not people who simply disagree or criticize something they find online, but there can be some overlap. It’s important to differentiate between someone who’s venting online and someone whose extra-curricular activity entails going on a troll rampage for personal entertainment. There’s a fine line between challenging someone’s position or views and trying to personally eviscerate them for fun.

Question: Are there particular platforms where trolls are most active?

Answer: Trolls love to go to Twitter, Facebook, Instagram and Reddit, but trolls can be found on all platforms. More specifically, they’re going to be on the platforms they believe they’ll have the most impact. That could be based on how large the platform is, who the users or members are or how easy it is to spread their message. You can even find trolls on comment sections of websites and news sites. Recently, I’ve found that even very successful YouTube channels are disabling comments because they don’t want to have trolls come in and change the climate of the engagement of comments. It only takes one troll to change a dynamic.

Question: How can we deal with trolls in online communities?

Answer: Regardless of the type of community, they’ll eventually face trolls. How to deal with trolls depends on the type of community and where the behavior occurs, but the important thing to remember is to be strategic in dealing with trolls, not reactionary. It’s hard not to feed the troll, but that’s what we have to do. Many Twitter communities have open tweet chats with a dedicated hashtag. Because Twitter is an open platform, it’s easy for anyone to interject themselves into the conversation and while engagement is what tweet chats are after, the goal of the people in that community who participate is to positively contribute to it, not to attack it. When a troll interjects themselves into a conversation, people often reply directly to or retweet with what the troll said and it’s not well thought out. An emotional reaction plays directly into the hands of the troll. This lets the troll know they got a rise out of you and it amplifies them. A better approach is not to publicly react. Instead, contact the platform and let them know the troll has violated policy. Another way to combat trolls is to get fellow community members to jump in and drown out the impact by leaving supporting and redirecting replies, which steers the conversation in another direction.

Question: Are there any resources out there to help?

Answer: You can go on CiviliNation’s website to learn about managing difficult people, trolls and hard situations as an individual, community or business. We offer a bunch of online resources. I also wrote a book called Civility in the Digital Age: How Companies and People Can Triumph over Haters, Trolls, Bullies and Other Jerks that offers a 30 day plan.

Question: You were a part of a documentary last year. Can you tell us more about it?

Answer: Amy Guth, a journalist and radio talk show host in Chicago, created a multiple episodic documentary called Din. The trailer and the first episode are available online. What she’s done is interview a bunch of people on how online hostility is suppressing them through harassment and abuse.

Question: Is there a way to get rid of trolls?

Answer: I wish there were, but so long as we have an open and free internet, which I hope we continue to have, getting rid of trolls is going to be impossible. What we need is to demand that technology companies and social media platforms take ethics more seriously and make them a greater priority. They need to take a hard line in disallowing misinformation and disinformation, which is what trolls spread. As long as platforms operate of an advertising model with revenue largely dependent on getting as many views and likes as possible, in practical terms, it’s going to be impossible to get rid of the trolls. What we can do in the meantime is to adopt what we’ve talked about.

Question: What is one thing that people can do to help you at CiviliNation to fight online harassment?

Answer: Demand that online platforms take responsibility. They claim they can’t do anything about it, but that’s not true. They have to be held accountable. Come to the aid of those attacked online. We have enormous power to shape the culture of the internet if we take the right steps. Respond, don’t react. Also, make a small donation to help us with our education, advocacy and outreach efforts.

Want the detailed insider info and our best tips and tricks? Be sure to listen to the full episode!

If you’ve had issues with trolls, come over to the Communities That Convert Facebook group (Secret Word: Action) and talk to us about it. Also, hop over to Civilination to make a small donation that will help to keep the Internet more sane, and watch a few videos in the Civilination Academy.

Come join our community on Facebook where we extend the conversation from each episode and deliver bonus content.

(shhh. The codeword is ACTION)!

How to reach Kami:

How to reach Madalyn:

Other Places to Listen